The importance of legionella sampling as part of a comprehensive safety programme even in ‘low risk’ buildings.

One property managed by Nant Ltd. is a medium-sized administration building used by police officers with a general admin space, basic catering facilities, locker room and washing/toilet area. It is of fairly modern construction and has recently been completely renovated. The renovation included the hot & cold water systems, water heaters and much of the plumbing as many rooms within the property had experienced a change in use.

Due to the fact that the users of the building do not fall within any high-risk categories the main focus of the monitoring was the recording of stored & outlet temperatures rather than regular legionella testing. 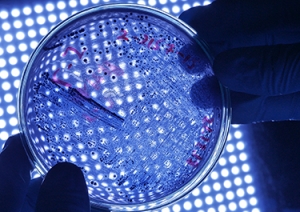 After many months of monitoring with no recorded problems, the reconditioned hot water heaters started to fail and the hot water temperatures fell to a level that caused concern. In line with agreed procedures samples were taken to the laboratory. Upon analysis, these samples showed the presence of large colony counts of the legionella bacteria, Sero Group 1. – the strain of the bacteria which is responsible for most cases of the potentially life-threatening Legionnaires Disease.

An immediate clean & disinfection of all hot & cold water systems in this property was carried out with biocide being drawn through all units and allowed to remain in the pipework for the designated contact time. In addition – and as a matter of urgency – the hot water heaters were repaired and it was ensured that the water temperatures returned to the correct levels. In line with normal practice, a further set of samples were taken a few weeks later to check that the water systems remained clear of the bacteria. To everyone’s surprise, and despite the water temperatures all being at acceptable levels, high colony counts were again found to be present in some parts of the hot & cold water systems.

A further urgent in-depth investigation was then undertaken and large numbers of capped off, redundant pipework or dead ends were found in ceilings, wall ducts, and under floors. These were the remnants of the hot & cold water systems in the building prior to the renovation works and these still contained old stagnant water. The ambient temperature at which this water lay allowed the legionella bacteria to multiply undetected and to re-infect the main water supplies in the property.

This problem had obviously been present for some considerable time and more worryingly was being used to supply showers used by the police officers in their locker room changing areas. The unobserved risk had been VERY HIGH. Had the water heaters not broken and caused the hot water temperatures to fall to unacceptable levels the legionella analyses would not have been taken and this problem would have remained undetected.

Activity within this building was reduced to a minimum and immediate action was taken to locate and remove all of the redundant pipework, after which the entire system was disinfected again. The use of all water outlets was monitored and little-used outlets were identified and removed. At the same time, one of the existing cold water storage tanks was isolated and drained so as to reduce the quantity of stored water and increase the water turnover. Furthermore, all of the push button showers were removed and completely replaced with a lower number of conventional units which were consequently used more regularly. The combination of all of these measures proved successful in eliminating the problem.

This illustrates that sometimes, even in traditionally ‘low risk’ sites, temperature monitoring may not be sufficient. Unless sampling is employed as part of the monitoring regime, legionella bacteria can remain undiscovered in what would outwardly be viewed as a low-risk situation. It highlights the need to employ fully qualified and legionella-aware plumbers and the need to ensure that the removal of any old pipework (and other potential breeding areas). Such precautions should always be written into any refurbishment works.

Any cookies that may not be particularly necessary for the website to function and is used specifically to collect user personal data via analytics, ads, other embedded contents are termed as non-necessary cookies. It is mandatory to procure user consent prior to running these cookies on your website.